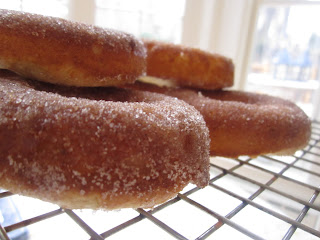 I love donuts. Love 'em! It's wrong, I know. I shouldn't. My father-in-law reminds me at least once a quarter that they're one of those foods on the "never eat, ever" list he got from his Cardiologist. And yet.

My poison are the cake variety, plain, chocolate frosted, or coated with cinnamon sugar. I cannot eat just one. I know all the bakeries nearby who make them and can tell you in order of preference which I like best (Wuollet's).

But I'm not crazy and didn't ever contemplate making them at home. I mean really, a hot pot of oil on the stove sending rivulets of grease onto every surface of the kitchen and beyond? It might put me off donuts and we have too much history for that. Then I saw a post by PJ Hamel for baked donuts at the King Arthur Flour site.  I spotted a kindred spirit and decided this, I have to try. You do need a special pan. I found mine on Amazon for about $9.

They are really good - not exactly a donut...but better than many I've had, without all the grease. Kind of a cross between a donut and fresh cinnamon toast.

1. Mix sugar and cinnamon together in a shallow bowl or plate and set aside.

1. Lightly oil donut pan. Mix all dry ingredients in a bowl and set aside.
2. Beat butter and sugars until creamy and light in color. Add oil and eggs, one at a time while beating, then add vanilla and applesauce and beat until combined.
3. Add dry ingredients, alternating buttermilk and dry mix, stirring well with wooden spoon until blended. Spoon into donut pan (you may need to use your finger to push the batter around the molds).
4. Bake for 8-10 minutes until golden. Remove from oven, cool for a few minutes then turn out onto wire racks.
5. Brush with melted butter and roll in cinnamon sugar mixture. 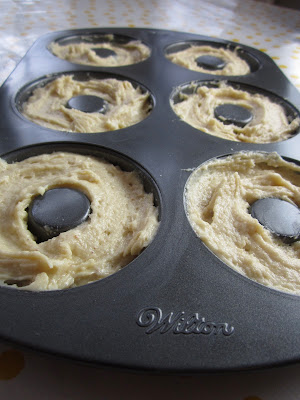 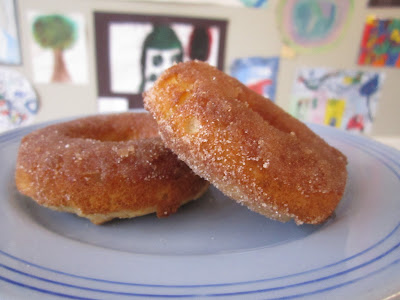