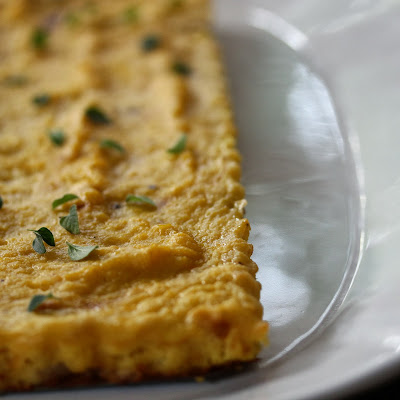 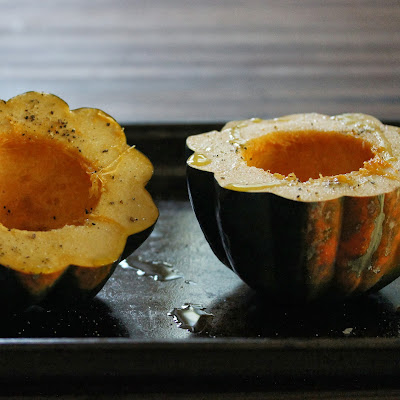 This is a weird mash-up today but stay with me.

This morning I had to move our dear old thoroughbred horse, Stanley, from the barn he's called home for the past eight years. Stanley is 24 years old (old), 17.1 hands high (big) and gentle as a bunny. He's known as the "Professor" for his ability to teach green riders, including yours truly. He's forgiving and honest and never pulls cheap tricks like stopping in front of a jump or turning quickly to avoid something scary (like a flower box or a flapping banner) - a maneuver that tends to pitch the rider into the sawdust.

But life has gotten busy and I've not been able to get out and ride him as much as he needs to stay sound and healthy. So I decided to move him to another stable where he'll give lessons three times a week to little girls who will love him and hug him and feed him carrots all the day long. The caretakers are conscientious and kind and I knew he would be well looked after. But still, I was moving him from his herd, his eight buddies who he spent the days in pasture with, where it took him five years to make it to herd leader, top of the heap. 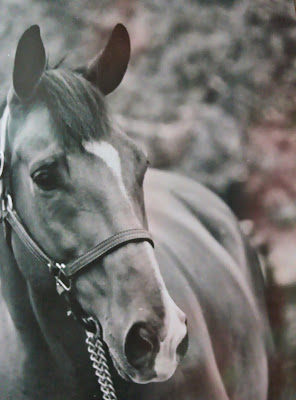 As we were loading him into the trailer to take him to his new home, we heard a whinny from his mates who were watching from the field.  He called back and his eyes opened wide at the realization that he was going away from them. I burst into tears. What was I doing?

I followed the trailer to the new place five miles away, trying to get ahold of myself. What if the horses shun or bite him? He shouldn't have to deal with that at his age. We could always move him back if it didn't work, I thought.

We took him off the trailer, showed him his new stall and gave him the fattest, freshest apple I could find. He was alert and looking around, but calm. The other geldings were outside already and it was a beautiful day so we decided to take Stanley out and see how they did.

While we were leading him to the paddock, Christy, the barn manager, mentioned that some of their horses had been at our old barn years ago....Roman, Omar, Patrick. I remember those names, I said. Well then, she said, they'll be old friends. But it's been years, will Stanley remember? Oh yes, she said, they remember very well.

The horses saw us coming and raced to the gate to see the new guy. We shooed them away to give Stanley space to get in and turn around.  They swarmed around him, smelling, touching, really checking him out. He was accommodating for a bit, then walked off.  Roman and Patrick followed, touching their faces along his.  No drama, no high jinks, no aggression. They remembered too. Stanley continued to a grassy hill and began to eat. Omar sidled up alongside him and did the same. The rest of the herd went back to the business of grazing. The sun was bright and the breeze was warm. It was going to be OK.

When I got home I was worn out from crying and fretting and the beauty and resilience of these special creatures. I needed some simple comforting food - nursery food. Baked squash made into an rustic crustless quiche with sauteed onions and little else. Fluffy and creamy with clean squash and sweet onion flavor. Easy, with no crust to worry about. Enough worry for one day. 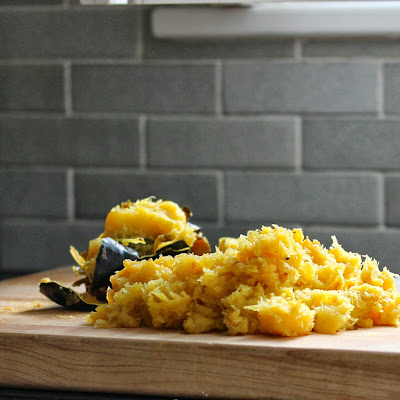 Inspired by Patricia Wells At Home in Provence

2. Split the squash down the middle (use your heaviest knife - I stick it in lengthwise and give it a thump to break it open). Scoop out the seeds and strings, place on a sheet pan, drizzle with 1 tablespoon olive oil and sprinkle liberally with salt and pepper. Bake for one hour or until a fork slides in easily. Remove from oven and, when it's cool enough to handle, remove the flesh with a fork so you get a fine texture with no clumps. You should have about two cups. Reduce oven temperature to 375º.

3. Slice the onion and pepper thinly and saute over medium heat with 1 tablespoon butter, 1 tablespoon oil and a pinch of salt until completely soft (20-30 minutes depending on how thin your onions are).

4. Whisk the eggs, milk, 1/4 teaspoon salt and a pinch of black pepper in a large bowl, then add the squash and mix until blended.

5. Butter an 8 inch springform pan or similar with remaining tablespoon of butter and distribute sauteed onions and peppers evenly over the bottom. Pour squash mixture in.

6. Bake for 25- 30 minutes until it's firmed up and a knife tip comes out clean when inserted into the center. Let rest for 5-10 minutes before serving. Sprinkle with fresh herbs, if you like.