Roasted Pepper Crostini and a Rant 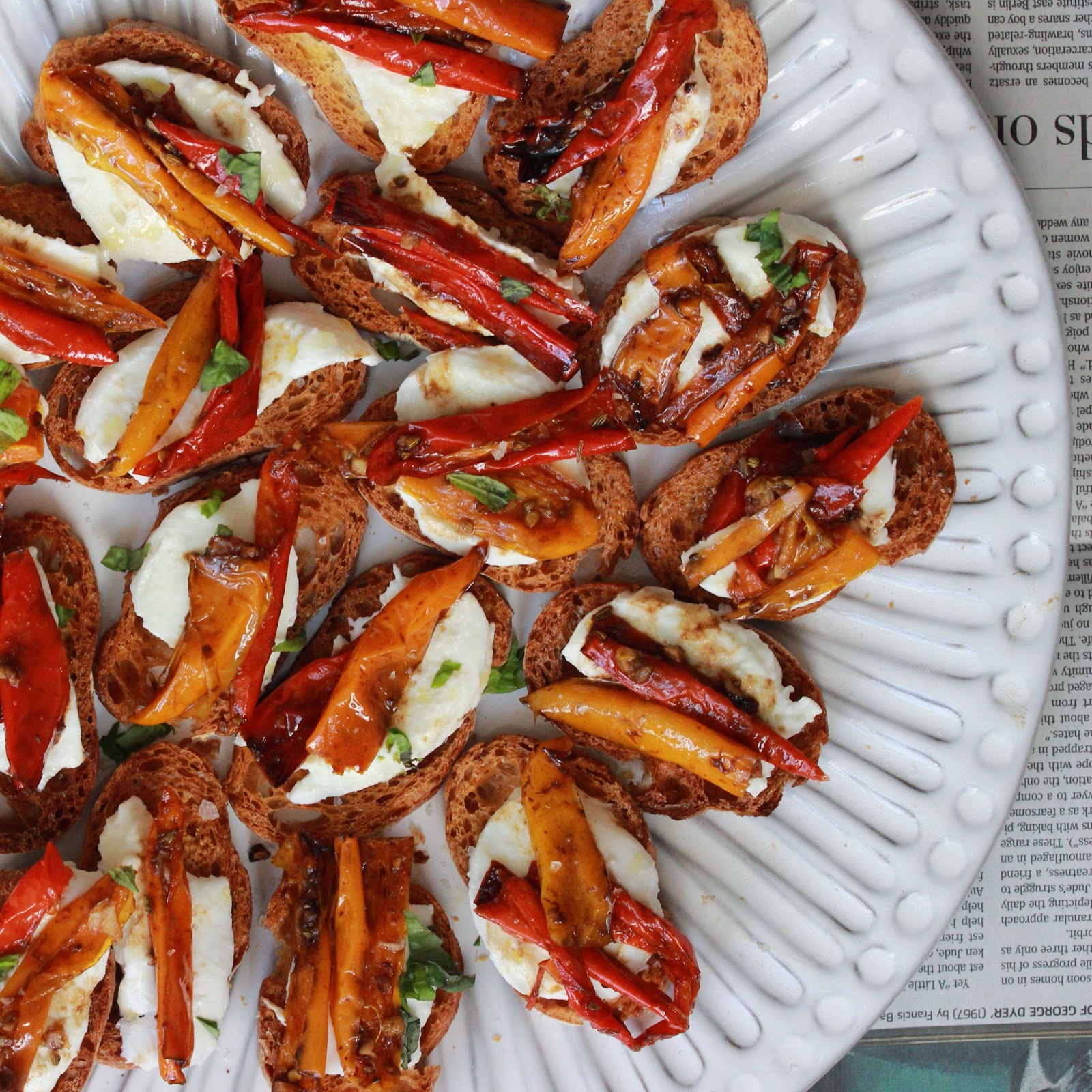 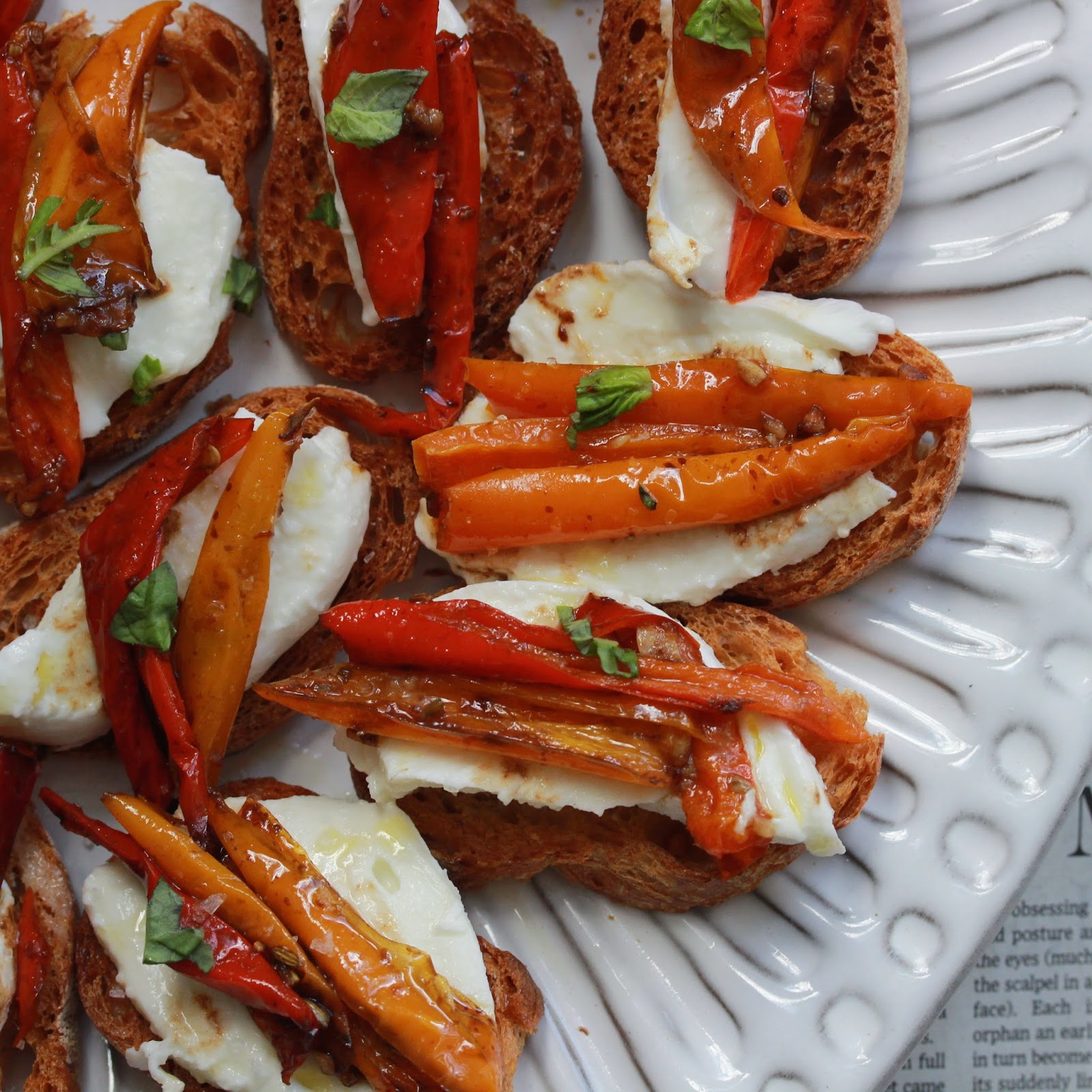 I've been blogging for a few years now and it's an impulse I can't fully explain. My stock answer is that blogging is a creative outlet, which is true. Taking pictures, writing and cooking are relaxing and an opportunity for expression. Connecting with others in the food blogging community has been nice too and there are many compelling blogs with creative food and photos and narratives written by people who have thought-provoking, informative or funny things to say.

There are also lots of blogs out there with decent looking food and nothing to say other than "my family gobbled these up!!"  or "these are fast and easy and sooooo good!" Shit, I've probably been guilty of these kind of statements. But they don't sound convincing and they don't tell me anything about the person behind the blog. They sound like a commercial and I feel tricked.

When I say stuff like that it's because I don't really have anything to say and I think I "should" be posting something to stay current and because that's one of the rules of food blogging if you're going to make money at it. But that's never really been my goal.

I know, I know, I have an advertisement along the side but that was another I "should" because most bloggers seem to have ads and it makes them look successful (and I'm locked in for a year).

What feels like success to me is a good recipe, pleasant photos and a sentence or two that hits the nail on the head and/or makes me smile on the inside. I try to be authentic and write thoughtfully. I don't want to waste your time. 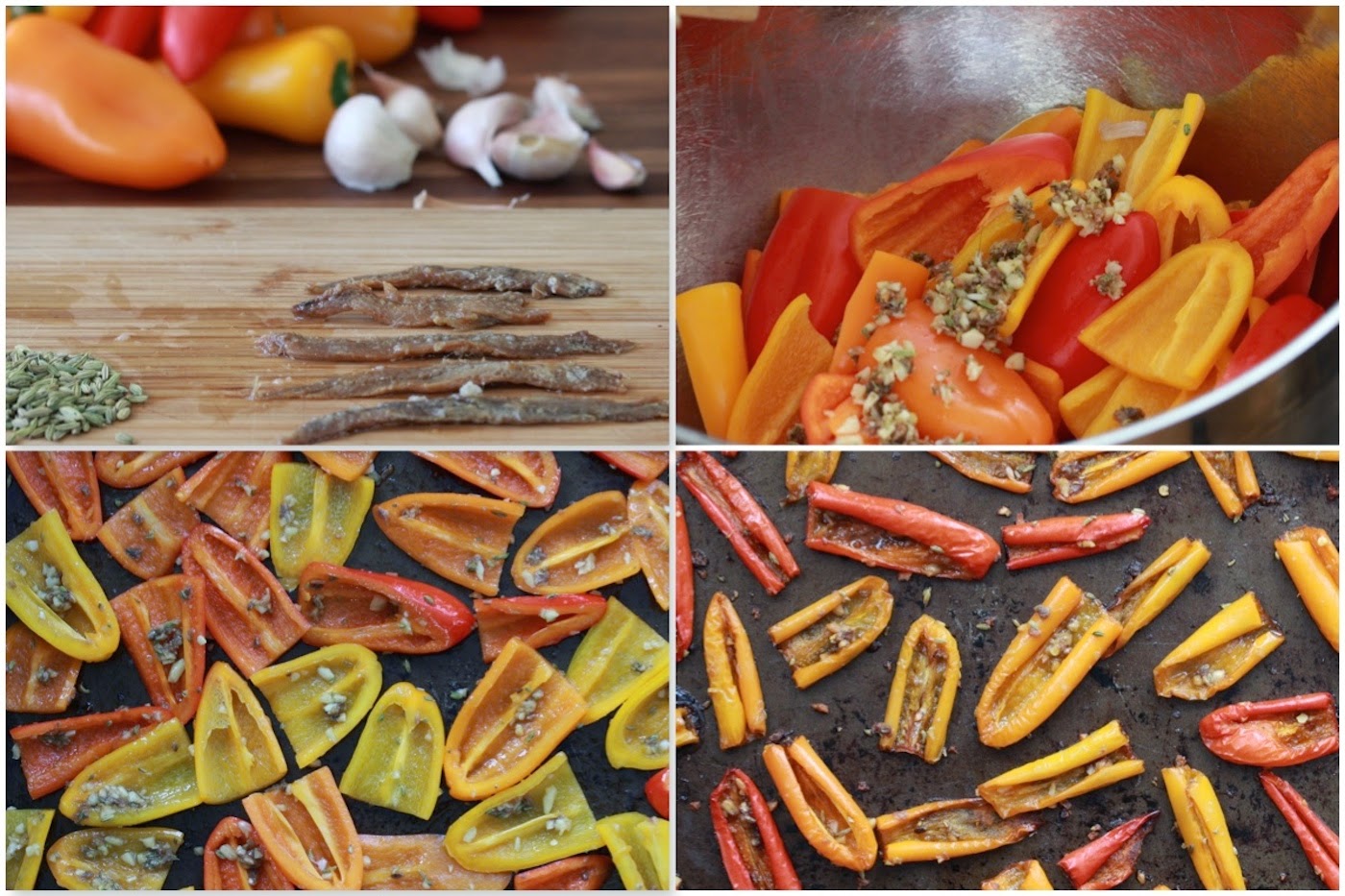 Other thoughts on food blogging.

1. There are few 100% original recipes. Credit goes to other blogs, cookbooks, magazines, mother-in-laws, restaurants, friends, etc. There's no shame in it so we should all give it away, give it away, give it away now. Sometimes I cook a recipe exactly to the quarter teaspoon. Sometimes I take one part of a recipe and incorporate it into something else. This recipe, for example, was from something I saw on the BBC site and went from there. Mine is similar, but different and I give credit because I remember where I got the idea.

2. Food blogging is kind of like high school where gaggles of bloggers form cliques and crush on each other in posts and comments and pin boards. Sometimes I think we're all just talking to ourselves and I guess that's OK, even great, but let's have a real conversation. There's too much chirpiness out there.

3. Beware the sponsored post. Did you really like the cranberry balsamic vinegar that XYZ company sent you or paid you to use? I want to see the level on that bottle in a year.

Finally, what got me stirred up was the controversy over at Food52 regarding a much revered blogger's cookbook , this story on The Splendid Table and this excellent post from the excellent blog, Lottie + Doof.  I think it's a timely discussion.

Stem, seed and halve peppers. Put into a large bowl. Chop garlic, anchovies, fennel seeds and salt together until fine. Add to bowl with peppers. Pour olive oil over and toss until well-coated. Put on a rimmed sheet pan skin-side down (I scrape all the garlic mixture out of the bowl and put it inside the peppers. Roast for 1-11/2 hours until soft, remove from oven and turn up heat to 400º.

While peppers are roasting reduce balsamic vinegar on stove over medium heat until it thickens/reduces by half. Slice baguette and mozzarella. Toast baguette in oven until brown (light or dark), about 4-5 minutes. Remove from oven and rub with a halved clove of garlic, then top with a slice of cheese, a pepper or two (or you can cut them it half for little strips) and finish with a little balsamic and flaky salt.
Email Post
Labels: appetizer