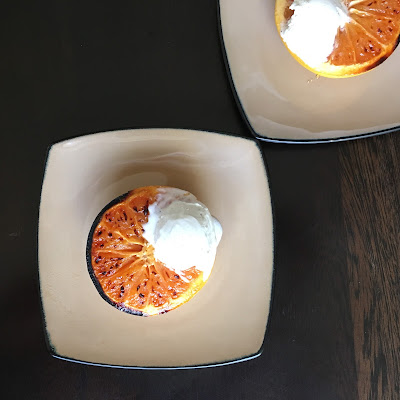 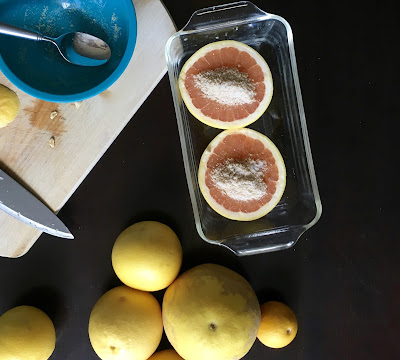 I've always maintained that Californians have a culinary and health edge with the produce they can snag year-round. Spending the last month in Palm Springs with my daughter while she pursues her equestrian dreams has made me realize I'm right. Take, for example, the grapefruit trees that line the busy street where I run. One after the other, heavy with gold orbs of citrus. At first I just furtively picked up the ones that had fallen on the ground and jogged with one in each hand like they were weights. Then, a few days ago, I saw guy with a bike and a basket picking them off the trees. He said it was OK and isn't it funny that they still sell them in the grocery store down the street? Yes, it is. Now I pick them straight from the tree too, sans cute basket because we're staying in a rental house that is lacking charming portable vessels of that sort. I use my tee-shirt as a hammock instead. 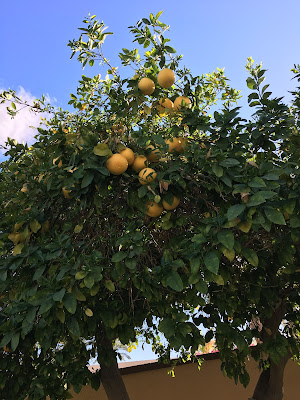 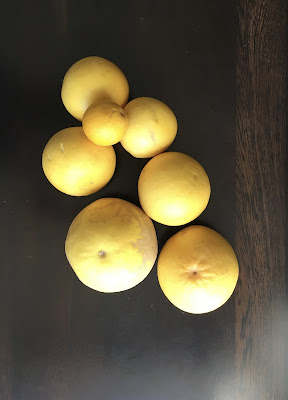 Today I picked more than usual. After cutting one into quarters and eating it right after my run, I decided to broil another for dessert. I love warm, cooked fruit and never tried citrus. Easy and fast. Cutting the segments for easy removal is the most time-consuming part.

Preheat broiler to high. Take a small slice off the rounder end of grapefruit so it sits level. Cut the whole fruit into two halves and cut the grapefruit carefully around the circumference and around each little wedge so they release easily when finished. Place in shallow baking dish. Mix sugars and salt together with spice, if using, in a small bowl. Divide mixture between the two grapefruit and spread out. Broil for about 10 minutes until slightly colored. Cool a bit and serve warm with vanilla ice cream. 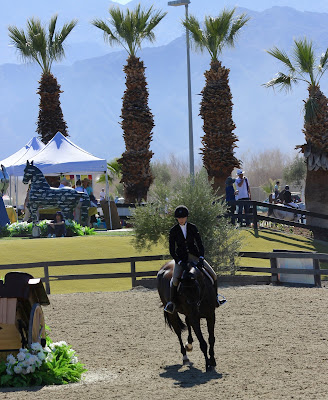 It looks like paradise and it is beautiful here, but this sport is not for wimps, equine or human. It's 90 degrees and she's wearing a long sleeved shirt, coat, breeches, tall leather boots and a hat that doesn't even shield her from the sun. But they both love to compete and make it look easy.