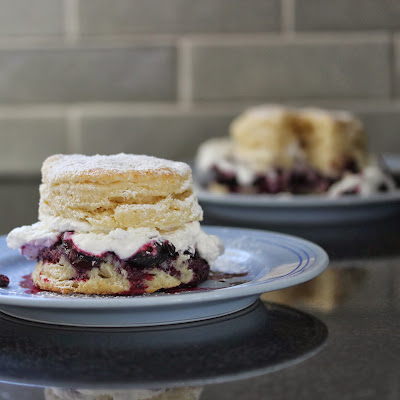 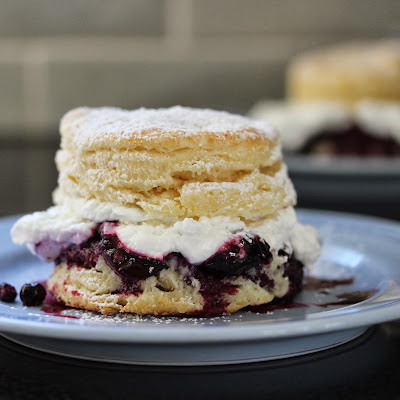 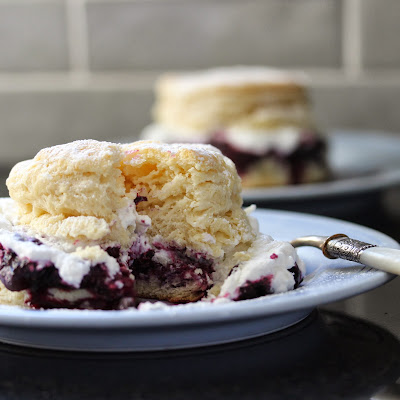 I'm pumpkin'd out this year. I blame it on Costco rolling out their ridiculously cheap and delicious pumpkin pies just after Labor Day. Add to that pumpkin muffins, lattes, bars and scones and I'm pretty much ready for a change by Thanksgiving. It's so American to beat a good idea to death. Kind of like what I'm doing with these biscuits (I can't help it - they're one of my favorite things and I'm just bursting with pride that I can make them).

I love cranberries and, fortunately, haven't had a single one yet so I thought of this dessert as an alternative to pumpkin pie (or as a way to use leftover biscuits and cranberry sauce). A little cranberry goes a long way so I added a healthy amount of blueberries (I also split the cranberries so they're closer in size to the blueberries). Lime stands in place for traditional orange and provides a nice lift. Lime is sort of tropical so I pulled in some whipped coconut milk to the traditional shortcake cream. Whipped coconut milk is a vegan dessert trick (thank you post punk kitchen) and couldn't be easier - just skim the thick part of the milk from a can, whip with a little sugar and you're done. I mixed half coconut and half heavy cream to keep it subtle. You want to put your can of coconut milk in the refrigerator the night before so it's nice and cold. You could also use pound or angel food cake in place of the biscuits. 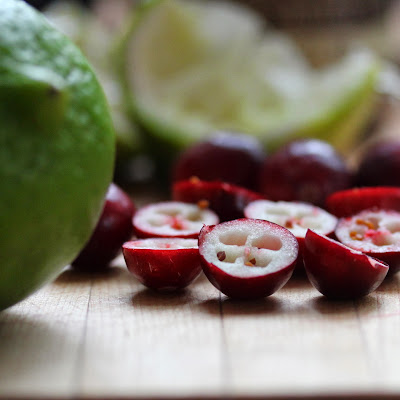 4 3-inch biscuits (from the recipe below or one you like)
1 1/2 cup blueberries (fresh or frozen)
1/2 cup cranberries, split
Zest and juice from one lime
2 tablespoons sugar
1 can coconut milk (not low-fat), cold
1/2 cup heavy cream
2 heaping tablespoons powdered sugar

2. Open can of coconut milk being careful not to shake it at all. Carefully spoon the heavy cream off the top and discard watery milk (or use in another recipe). Put in a bowl with a tablespoon of powdered sugar and beat with mixer until thick and fluffy. Do the same with the heavy cream in a separate bowl. Fold creams together.


3. Split biscuit and add a tablespoon or so of berries to the bottom layer, then cream and the other biscuit half. Dust with powdered sugar, if desired.

Note: These are best served immediately.

2. Put dry ingredients in a large bowl and whisk to combine. If using frozen butter grate using largest holes on box grater into flour and toss gently. If using chilled, add cubes to flour and work in with fingertips until pea-sized. Add cold buttermilk and mix with a spatula just until combined (will be shaggy and sticky). Turn out onto a flour dusted surface and knead a few times until it comes together. Using your hands or a rolling pin, pat and shape the dough into a rectangle, then fold it onto itself (so it gets thicker) two times (to a third of it's original size). Roll out and repeat (this is how you get flaky layers) one or two more times. Your final rolled-out dough should be 1" thick.

3. Dip cutter into flour and press straight down (no twisting) into dough. Re-flour and cut again. Instead of re-rolling the remaining dough, just pat together (these "remnant" biscuits won't be perfect, but still flaky). Place on an ungreased baking sheet.

4. Gently brush onto tops of biscuits will milk, cream or melted butter (optional - will make them brown).

5. Bake for 10-15 minutes or until lightly browned. Cool on wire racks. 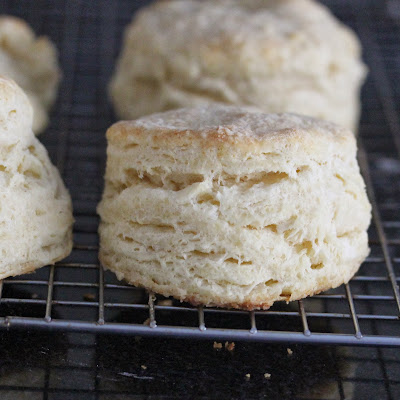