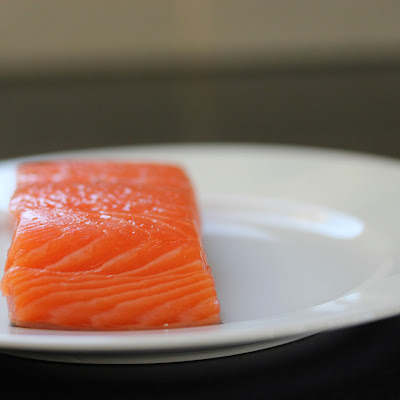 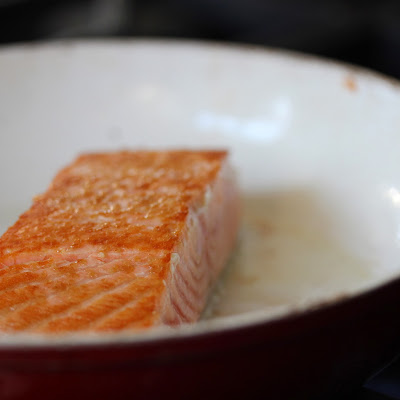 I can't tell you the number of times I've taken a perfect fillet of salmon and cooked the smithereens out of it - still tasty but dryish with white blobs popping out like acne on a smooth young face.  The salmon I crave is simply prepared with a lightly browned crust and tender, buttery fish inside. The flavor and texture is sublime and it celebrates the natural splendor of the thing. But I've not been able to master it.

Lucky for me I recorded an episode of America's Test Kitchen on PBS that happened to be about fish. They demonstrated a salmon preparation (albeit with a sugar/soy glaze) that achieves what I was looking for. The technique is a quick sear on the stovetop followed by a short bake in a low oven. It's kind of foolproof and I realized my error had been trying to cook it with too much heat.

I made this twice over the weekend and it turned out beautifully each time (and my skin is just glowing from all the fatty acids). Simple, once you know how - clean and perfect before the holiday indulgences commence. 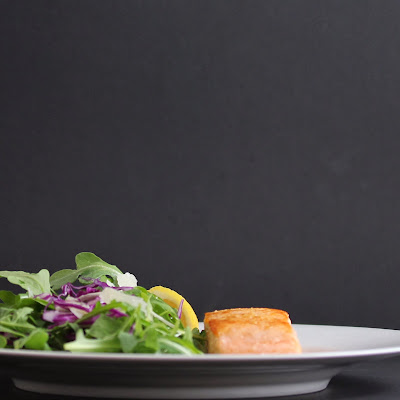 Really whatever you like, but the salmon is delicious with the peppery arugula, thinly sliced cabbage and a few shavings of Parmesan. Dress with a squeeze of lemon juice and a dash of olive oil.

2. Cut the salmon into 4 even sized fillets (about 2" wide), pat dry and lightly salt.

3. Heat a tablespoon of oil in a large nonstick, oven-safe, skillet over medium hear until shimmery (or until a drop of water sizzles).

4. Place fillets flesh side down (not skin side down - another mistake I had been making) into pan so they're not touching. Sear for 2 minutes until lightly browned. Flip and cook another minute with the skin side down. Move skillet to oven and cook for 8 minutes or until opaque*. If you see white blobs, you've gone too far.

Note: What kind of salmon you purchase is a whole other discussion. America's Test Kitchen recommends farm-raised Norwegian but I've read other sources that recommend only wild caught Alaskan.

*I first learned what opaque was selling clothes at Ann Taylor when I was just out of college. Opaque hosiery was kind of a new thing back then - most women were still sheathed in sheer black or taupe. I loved saying the word which I thought sounded so chic even though they seemed identical to what I had always known as "tights". So wait until your fish appears opaque or "tight". Both words are apt. 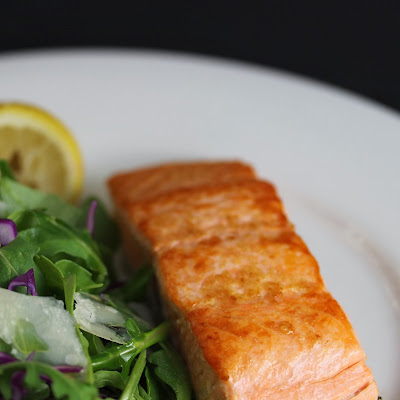