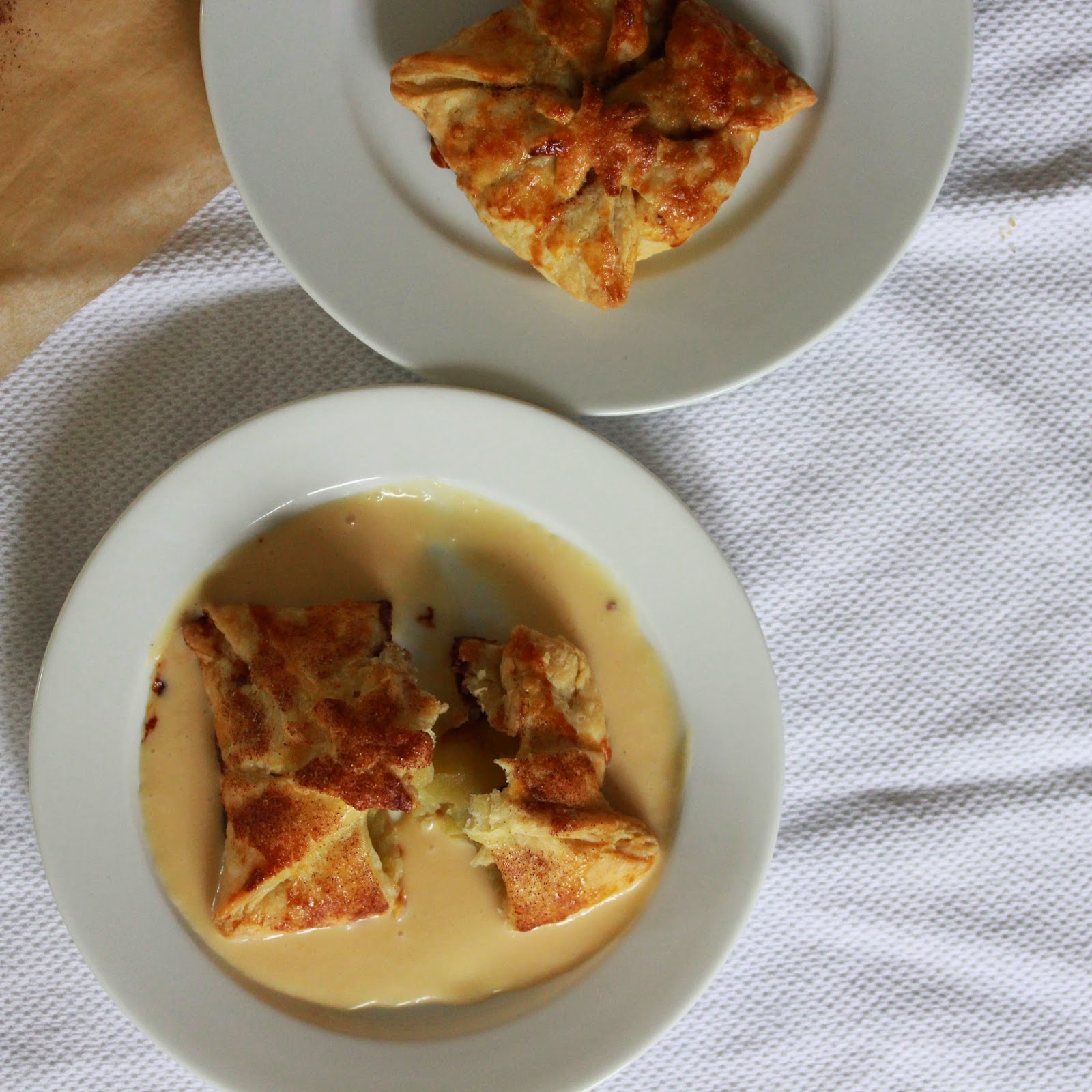 I won't lie. There's a boatload of butter in this recipe. But, man, it makes for delicious, flaky, flavorful crust and these little guys have a lot of it. A crispy personal apple pie with a sauce that tastes like melted apple cider ice cream.  An idea from Vanilla Bean blogger Sarah Kieffer. Taste like autumn, plus I get to practice making pastry which I'm steadily improving at, even enjoying. 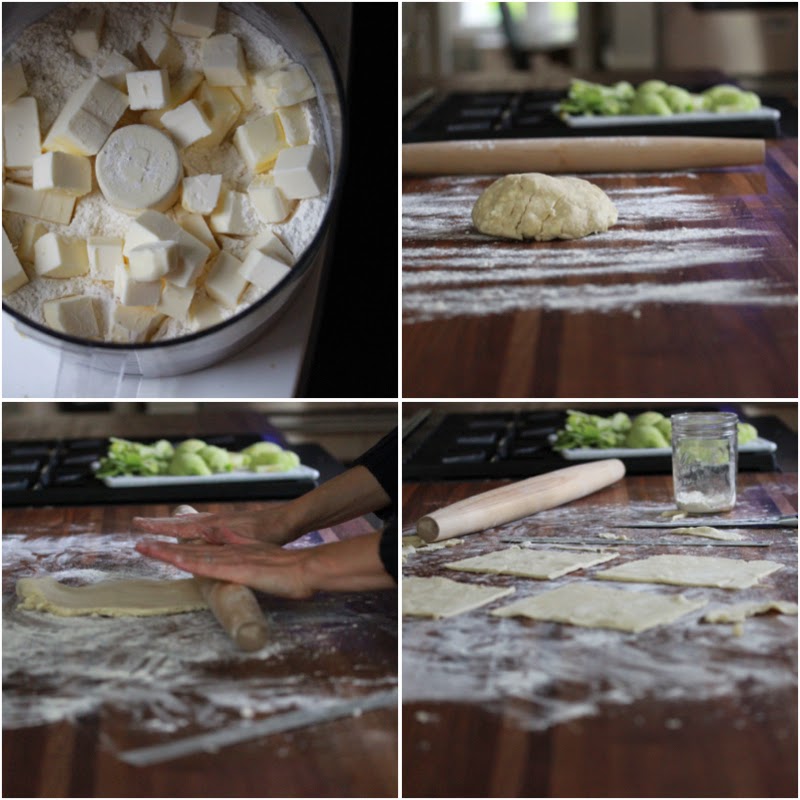 adapted from The Dahlia Bakery Cookbook

1. Put dry ingredients in a food processor and pulse to combine. Add butter cubes all at once and pulse until the size of peas then drizzle 8 tablespoons ice water in while pulsing. Check to see if it holds together when you pinch it with your fingers. If not, add a bit more water.

2. Dump onto counter and gather and press into a disk. Wrap in plastic wrap and refrigerate for at least an hour.

4.  Mix filling ingredients (except apples) together. Fill each apple half with a spoonful of butter/sugar mixture. Set aside.

5. Divide chilled dough in half. Put one half back in fridge. Roll out other half on floured surface to a roughly 12" x 12" shape that's about 1/8" thick. Trim into a square, saving scraps*. Put squares into fridge while you roll out the rest of dough. You should end up with 8 squares.

6. Put filled apple half face down in center of pastry square. Make a diagonal cut halfway to center on each corner and fold up to create a little pinwheel purse, pinching edges to close. Repeat with remaining pastry/apples.

8.  Place on parchment-lined sheet pans, brush each dumpling with egg wash and sprinkle generously with cinnamon sugar. Bake for 50 minutes until golden brown.

9. To make cream sauce put apple cider in a heavy saucepan and boil until reduced to a 1/3 cup (about 10-15 minutes). Add cream, vanilla and salt and whisk until combined. Serve warm or at room temperature.

*Use scraps to make decorative shapes to put on top of dumplings or roll them in cinnamon sugar and bake for a few minutes for a treat. 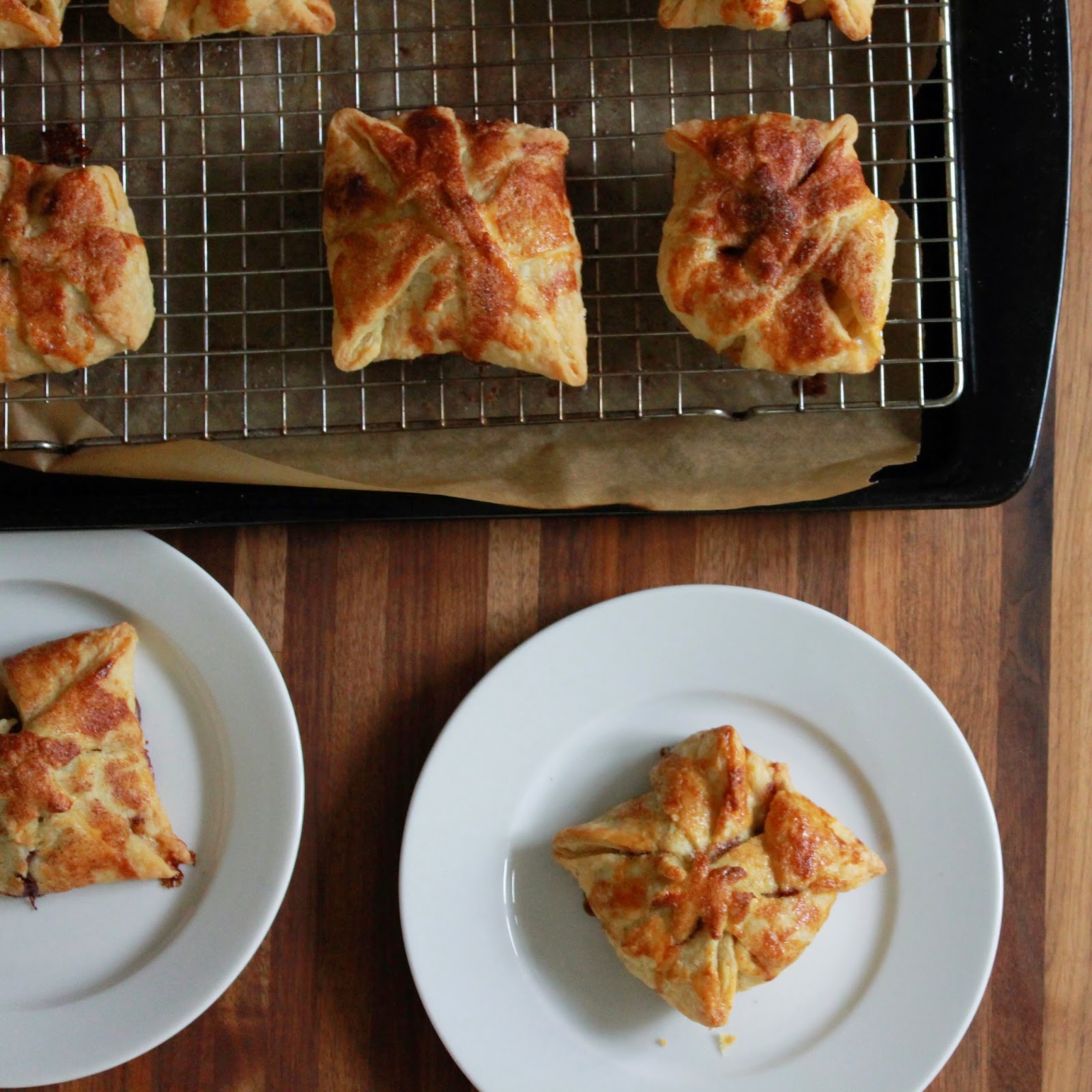